Hawk or Squirrel, Hunter or Hunted 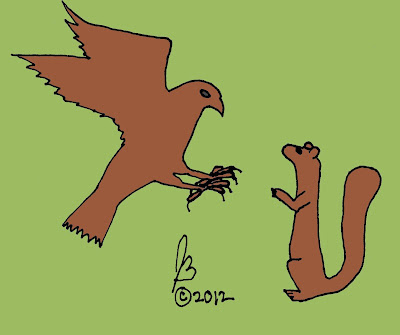 This morning I noticed a squirrel standing tall in the middle of my yard. A few seconds later, a Red Tail Hawk swooped in and tried to catch it. The squirrel leapt into the air and avoided certain death. The Hawk landed a few feet away. After several more attacks, and a gymnastic-like presentation of leaps and flips by the bushy-tailed rodent, he escaped into a nearby crabapple tree. The Hawk flew up, landed in the tree, and bobbed its head about looking for the its breakfast. The squirrel escaped by jumping branches through several neighboring trees, leaving the hawk spinning its head in bewilderment and hunger. The hawk eventually flew off and landed on some nearby wires to scan for its next target.

At first I associated with the squirrel; dodging the attacks of life's obstacles. I smiled when the furry little fellow escaped to safety. But as I watched, I realized I was more like the bird on the wire, searching for success and often coming up empty. If he gives up, he'll go hungry. Would God let the Red Tail starve? With no choice but to keep scanning, he'll continue searching for the opportunity to succeed.

What about you? Are you more like the squirrel or the hawk.