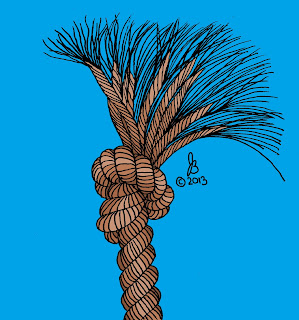 In response to a recent query, an agent wrote that she was afraid not. Aside from the old joke about a rope that’s refused service in a bar, goes outside, has its friend tie it in a loop and unravel its end. It goes back in and the bartender says, “Aren’t you that rope I threw out of here. The rope says, “I’m a frayed knot.” But back to the agent: It seemed an odd thing to say. An agent never admitted to being scared from my query. She was probably just being flippant in her use of an idiom. What she should have said was, “I believe, regrettably, that the answer is no, or “Unfortunately, no; I regret that that is not so.” Technically, the way she phrased it, it means she is not afraid. But no; I’m afraid not. So it’s a “no?” I’m afraid so. The full sentence should have read, “I’m afraid I can not,” something she probably did not want to admit. I had hoped she would be not afraid, but ‘fraid not. In the words of a John Michael Talbot song, I’d offer my dear agent this advice, “Be not afraid.” However, since much of my writing has taken a dark turn lately, maybe it was a subconscious compliment. My words may have actually scared her. Maybe I had written my query too well. But, then again, maybe knot.

What do you think about this fearful word play?
Have you ever been scared by a book?