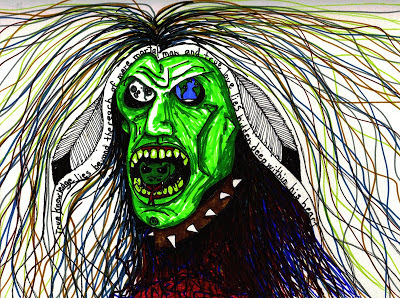 As a speculative fiction author, I dabble in horror. Two of my best are Twisted Fate and Dream Hunters. Though the second leans more toward science fiction, the dreams contained in the story are pure horror. Today I came across a list on AOL of the ten scariest movie villains. Some of them I hadn't heard of.
Here's the list.
10. Ghost Face from Scream
9. Angela Baker from Sleepaway Camp
8 Jigsaw/Billy the Puppet from Saw
7. Chucky from Childs Play
6. Pennywise the Clown from Stephen King's It
5. The Firefly family from House of a Thousand Corpses
4. Michael Meyers from Halloween
3. Jason Vorhees from Friday the Thirteenth
2. Leather Face from Texas Chainsaw massacre
1. Freddy Kruger from Nightmare on Elm Street

I wasn't familiar with the Firefly family or Angela Baker, but the video clip from Sleepaway Camp looks intriguing; a bullied child takes revenge.
Another list from YouTube listed as top ten horror movie villains (doesn't mention scary)adds Norman bates from Psycho, Jack Torrance from The Shining, Regan from the Exorcist, and Hannibal Lector from Silence of the Lambs. They also had the Xenomorphs from Alien, but if your going to have that, you also have to put in the predator from the Arnold Schwarzenegger Predator movie. That one however may be less horror and more action/adventure. If I'm including action adventure, I might want to add Heath Ledger's Joker from the Dark Night and maybe even Darth Vader from Star Wars.

What do you think? Did I leave someone out? Who's your scary favorite? 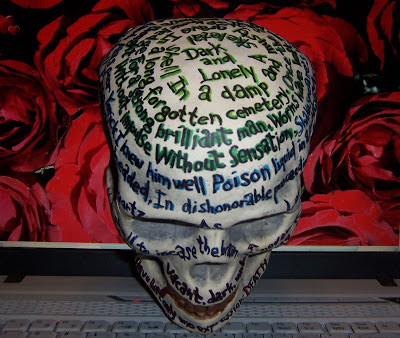 A skeletal shell
In a damp and musty grave
In a long forgotten cemetery.
Once the seat of knowledge
For a strong brilliant man.
Worms have left me vacant
Without thought
Without impulse
Without sensation.
Shakespeare's Hamlit
raised me in one hand,
Alas poor Yorick
I knew him well.
Poison liquid in a bottle
Puts me on crossed bones.
I'm out of my skull
Perhaps bone-headed.
In dishonorable proceedings
I am skullduggery.
In metal music
I'm 'Eddie the 'ead.
In Mayan Myth
I'm crystal quartz.
As Lord Byron's cup
I hold the wine.
Get it through
your thick skull.
A wooden shell
To incase the brain.
I never frown
A toothy grin.
My orbital sockets,
Adorned long ago with watery blue eyes
Now only stare;
Vacant, dark, unblinking.
In life, muscle and skin gave me emotion
Joy, anger, passion
No longer.
Sunken cheeks
Exposed teeth
Have left only one expression:
Death. 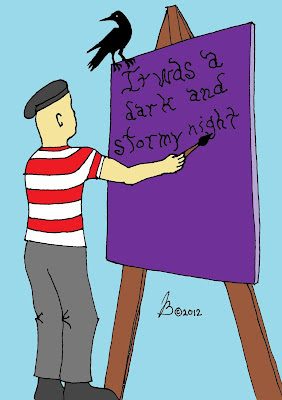 In an e-conversation, a friend of mine, Doug Sasse, asked if I've noticed the similarities between writing and drawing?

This really got me thinking because, as an artist and a writer, I've often pondered this.

In both mediums you are telling a story. You put thousands of little marks on a blank surface to produce a final product. Both forms take hours to produce. You know what they say, "A picture is worth a thousand words." But there is one major difference between the two. With writing, the reader spends hours, days, sometimes weeks absorbing your work. On the other hand, with a painting or drawing, you spend hours and hours producing the work and the viewer usually gets the entire story in a few seconds. Sometimes they might spend a minute examining the work, but never much more.

Continuing our conversation, my friend clarified his opinion on the subject with the following.

Both mediums start with an idea or a subject. You sketch in broad strokes, blocking in the structure. Structure is important in both mediums. Each element has to not only stand on its own, but work with the other elements to be successful. I think they call that Gestalt. Drawing uses different values of light and dark, just as does character development. But then once the basic structure is in place, you refine, refine, refine, until you've completed all of the details. Drawing is a right-brain exercise; writing is, to a large extent, also a right-brained exercise, requiring intuition and creativity. In the end, both mediums create something artificial that, ironically, enhance its creator’s ability to see the world, while providing the viewer a greater appreciation of reality.

I'd like to thank my friend and fellow Nebraska Writers Workshop participant Doug Sasse for initiating this dialogue and giving my cause to think.

What do you think?