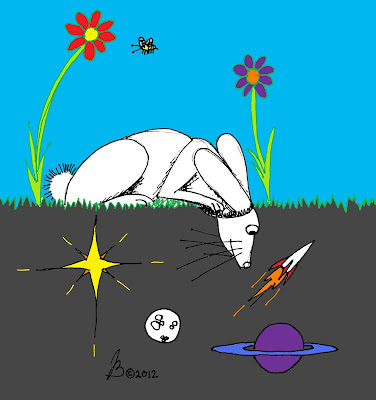 When the going gets tough, some people bury their head in the ground like an ostrich. (I don't know if ostriches actually do that but I saw it in a cartoon once) Sometimes it's easier to hide from a problem than confront it. A rabbit will lay perfectly still, hoping to avoid conflict. But if trouble gets too close, it will go for its hole. The rabbit is quite smart. Remaining undetected is better then becoming coyote dinner. The rabbit however, will always be a rabbit and more than likely will eventually become the dinner for some carnivore. Rabbits don't usually die of old age. As they slow down, they're no longer able to outrun the predator. The rabbit's main defense against extinction is to make lots of little rabbits before the unavoidable day of painful demise.

Instead of remaining inactive and waiting for your chance to escape into the rabbit hole, and eventually becoming eagle chow, there's another option. The worm hole. No. Not the tiny holes made by slimy legless creatures, but the wrinkle in time and space. In a precursory move, if you jump into the worm hole, you'll arrive at a new destination. The problem will have never existed. It won't have time to follow. Your exotic new destination might have its own problems. A new predator might be larger and have sharper teeth than the coyote. But at least you made the decision to act on your circumstance and did something to change it.

Now, if I only had the courage to take my own advice. Which are you more likely to do in times of trouble? Rabbit hole? or Worm hole?