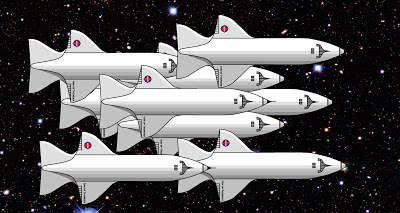 As promised, here is the discussion of light speed travel and time disruption. In my story “Son of Thunder," an experimental propulsion system pushes a ship towards Mars at a percentage of light speed, creating a time anomaly for its crew. First of all, Einstein came up with this convoluted theory of time dilation where the closer you approach to light speed, the slower time moves. So, using Einstein’s “twin paradox,” if a twin traveled at 99.99% of light speed for six months, when he returned his twin would be fifty years older than him. Really? Prove it Einstein. As mentioned in previous discussions, without referring to wormholes or time wrinkles, limitations of light speed travel are based on increasing mass and the need for an infinite energy source. So how can we test it? Well, the first experiment was conducted in 1971 with atomic clocks and an airplane traveling around the world at 600 miles-per-hour. After the trip, the moving clock was a few billionths of a second behind the stationary clock on the ground. A few billionths? Really? Whoop-dee-do-dah. In more recent years, the same experiment with atomic clocks was conducted using the International space station. This time, after six months orbiting the Earth at around five-miles-per-second, the difference was about seven one-thousandths of a second. WOW? (sarcasm). Maybe Einstein was right. Well, these types of miniscule time differences don’t make for good science fiction. And no matter how much we slow time we can never make it go backwards. The time dilation theory is much different then a theory I used in my story “Kronos Methodios” where a machine freezes its occupant in time or perhaps propels them through a wrinkle and deposits them at a point in the future. So, for my story, my time incursions caused a possible leap between alternate time lines or maybe just delusions to the travelers themselves. Anyway, the time anomalies in “Son of Thunder” wreak havoc with the timeline, threatening the safety of the courageous astronauts conducting the experiment. Can they straighten out their problems or will it cost them their lives. What are your theories on time travel or light speed travel? Anything I failed to mention?
Jim 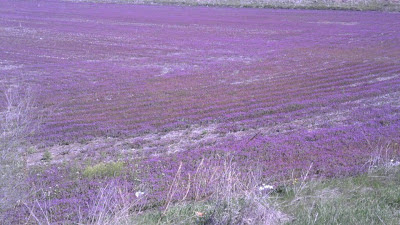 Around the corner
Near the top of the hill,
Is an eye catching sight
that’ll make you look twice,
maybe thrice.
If you’re not in a hurry,
you might want to stop,
get out of your car
and wonder.
After months of brown earth and dreary skies,
As the ground is born with newfound strains of green,
A field of purple clover turns heads
And imaginations of passers by.
If the rush of life affords you,
leave your car behind,
stand at the edge of an alien landscape
in awe and spectacle.
Drink in the color,
the sweet smell of the bumble bee’s delight.
Take the time,
observe the marvel,
sensory jubilation.
For next week
the plow will turn the field to brown again.