After finishing and publishing my poetry anthology, “do ants have souls,” I need new goals. I have plenty of crazy ideas. If I try to work on too many projects at once, I could wallow in a time warp. Here are the major ideas crying out to be heard between all four quadraspheres of my cerebral cortex and cerebellum. 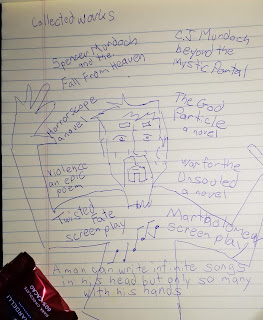 Spencer Murdoch and the Fall From Heaven
Spencer’s chosen-one son reaches school age and is bullied at school while Spencer focuses elsewhere and decides to take control and enter the portal.

God Particle
A physicist discovers the God particle and is instantly transported to heaven and learns the truth of God and the universe.
For this I need to read the popular 1993 science book of the same name. As if I didn’t have a large enough stack of books in the to-read pile behind the stack of books in the currently reading pile.

Horrorscope
Brothers born on opposite sides of conflict on a planet where zodiac cast system determines position in society.

War for the Unsouled
God allowed only so many souls when he thought Earth into existence. Now, good and evil battle for the hearts and minds of the unsouled.

Yes. I created a word for this one but it’s okay ‘cause I used it in the title.

Screen play adaptation of Twisted Fate
After the seemingly random discovery of an abandoned barn, a fun-loving young man endangers his friends in a deadly mystery beyond his earthly understanding.

Screen play adaptation of Martholomew
A high school boy and a new girl in town trespass on forbidden ground and discover a supernatural truth to an unearthly local legend.

Violence
An epic poem on gun violence I’ve been working on for a while but need to assemble into some kind of reasonable form.

I could ignore it all and spend my days playing guitar and writing songs. A man can write infinite songs in his head but only so many with his hands.

Or I’ll go with what I decide to love.